Posted by Joe Lategan on Monday, May 13, 2013 Under: Kruger National park Photoshoot March 2013
I spend some time at a low water bridge north of Letaba camp watching and photographing birds catch fish and the interaction between them. What was interesting and pretty to watch was that each bird has his own little fishing spot just like fishermen around a dam or river would do. They each have selected habitat or fishing spots.

The small black lily-trotter, the smallest bird of the lot was going for the smallest fish in the shallowest piece of the flow or he was last in the food chain of small fish, not that it is not man enough to stand its ground against the largest birds however. Quit a feisty character I might say. The hammerhead would catch in a little deeper water but only a meter away from the Lilly trotter and the lapwing would concentrate on the opposite  side of the low water bridge or the downside where water starts flowing   over the bridge catching fish swimming downstream before they swim over the road. These were all fish that tried to escape from predatory fish, crocodiles, and catfish approaching from this side. They are naturally the smallest fry as well.
Here it forms a dam wall in the river before it runs over the road and runs down a series of small rapids down the other side of the road.
The other birds prefer to catch on the down flow side of the river where water ran over a few rocks into shallow stream between the reeds. They all swim upstream like most fish tend to do and naturally the larger fish that migrating.

A giant heron that were the most nervous of all the birds flew away when I initially approached with the vehicle took 2 hours to return and move closer to my vehicle where he waited for the larger fish lowest downstream and away from the vehicle. Every time too large a fish swam up stream towards the smaller birds they would let the fish swam past   to be picked off   by the bird that thought it was large enough to swallow it.
I waited anxiously for a large enough fish to swim upstream for the heron to swallow and luckily within 15 minutes I could hear a relatively large fish came rushing up the stream between the reeds. This was audible when you got used to the general sounds of the flow. The water here was about 3cm deep and relatively fast. The fish really had to swim strong to move upstream. The smaller birds immediately moved away to  gave way to the heron that moved closer to the water in an instant hearing that a fish is approaching but not yet  visible. Just one strike and...Fish on! Luckily I was close enough to get only the head into the frame with a 400 mm lens.  Due to its long beak the image filled the frame with the fish   in its beak. As soon as it lifted its head with the fish in its mouth I saw it was a small tiger fish and pressed the shutter instantaneously.

I was much chuffed when I saw the tiger fish’s set of teeth. It turned sideways and that made it easier to get the fish and the head in the frame as I was on an aperture of f4 only I think.
The water that ran over the road was not more than 2mm deep and fish from 10mm to 15cm swam over as the instinct to move up stream controlled its senses instinctively. It was also here that the kingfishers caught their fish as it was deep enough for them to dive into the water. Of course they are much more difficult to catch as they tend to fly all over and selected fishing spots very erratically. If you don’t have a branch that has been identified on   its fishing route that you can sit and wait at it is not very easy to get them in the action diving for a fish. So within 2 meter of water there were, the lily-trotter, hammerhead, green heron, blacksmith lapwing, giant heron, and king fisher, crocodile, catfish and tiger fish fishing!

Besides that there was a smallish monitor lizard gulping up fish by the dozens every 30 minutes. The crocodiles were also present in the water on the wall side of the river before the water ran over the bridge ready to grab any of the larger fish that made it past the heron swimming upstream. They grew big over the years living at this bridge. A few meter upstream a group of hippo also moaned while I was capturing the images just ensuring I had the right sounds in the background to set the mood for my morning at the office.
Why did I pick to sit here at the low water bridge and not drive around looking for lion or other big cats like all the other photographers?
Knowing what I know about the habitat and evaluating the intelligence I had from the ranger and other visitors I decided that there is not much action in the immediate area and made the call to pick a spot where the most animals were grouped together and to stick to that spot regardless of the results. The small habitat (shallow water) favoured by all the species made it extremely possible to capture a variety of species interactions. Most people would race around to get to a kill of mega predators but if the chances are slim for that, images of a few other kills such as birds of prey or other smaller creatures would do as well. In other words I normally ask myself what would be the best images at the end of every day when I returned to camp if there was a competition on. If you are a professional every day must    bring in a sellable image or good enough image to use in marketing on one or the other platform.
The interaction of species regardless of the size is normally a good spot to spend time at. 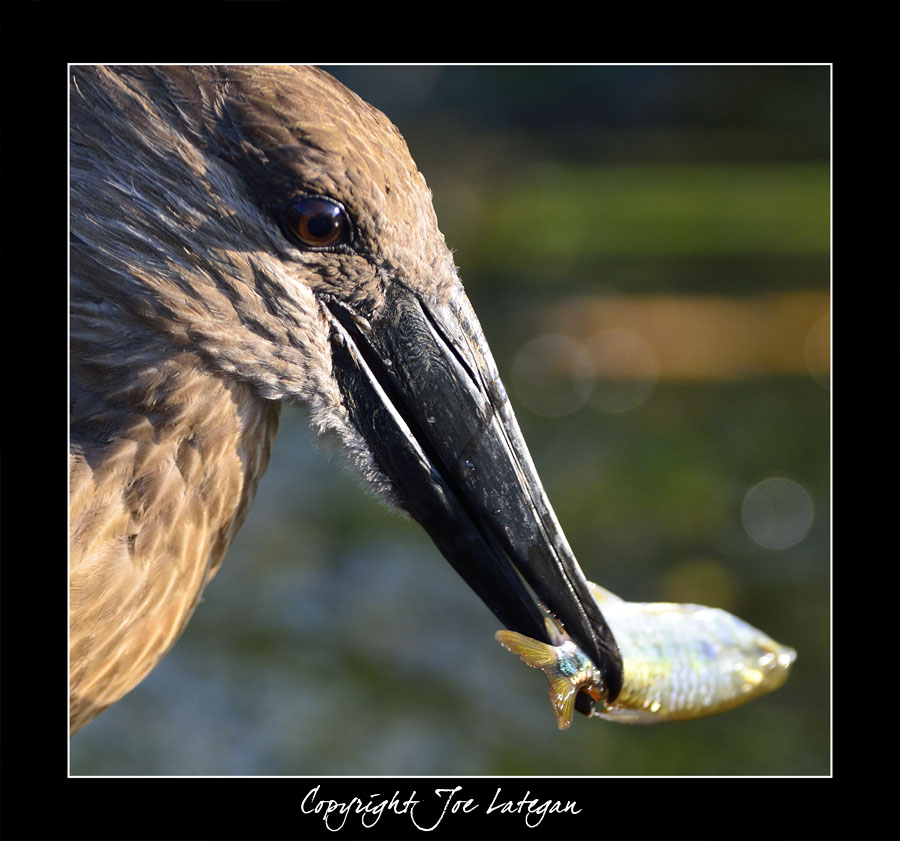 Lion and hyena images
We had a very quite morning and afternoon photo sessions on the road. I spent the whole morning at a water hole and took a long drive in the afternoon with very little results. I was   just making the remark to my host and friend that I have not seen such little animals before  on the main roads(Including birds and reptiles). We were running late and all the other vehicles were in the camp when suddenly a lioness appeared in the middle of the road with a very small cub in her mouth galloping down the road in the same direction we were heading in.


I had to drive next to her and it was just impossible to get a nice shot as she covered a lot of ground fast. I tried to race ahead and let her run into the shot but I didn’t want the tar road and she was coming down the tar road in the picture so after three attempts aborted the technique. Never the less I tried with the long lens but every time she was next to the vehicle or my window I had to take a shot. She had a collar  on that also irritated me and I knew I had to get a shot more from the front to hide the collar or from the grass but I would have had to leave the road and that is illegal. One image that worked was when she looked towards me when I drove next to her. Then I also had to take   the image from lower than the vehicle window as to not to get the tar road in the picture and   therefore I had to drop my hand with the camera outside and towards the road to get level with her. The sun from behind us into the lion also didn’t work and I knew I had to get on the other side of her to get the sun from behind to give some dimension to the image as the sun was now very low and lit up the grasses on the side of the road as well as her silhouette very nicely. I thus had to drive with the one hand and grabbed my other camera that had a 105mm lens on and popped the flash for some fill flash into the sun.

I did not have time to change lenses to put on the wide angle or a 50 mm. Using the one hand to drive I pushed my one arm out of the window below the window to get to the level and hoped she would look at me which she did from time to time as my hand and camera was probably between 1 and 1, 5 meters away from her while she galloping and calling for what I think was another cub and listening. Of course I didn’t have time to select the proper settings but realised I had to get the shutter up as it was a bit low for my shaking arm. I immediately afterwards realised I should have done a slow shutter moving shot with a fill flash. It would have been awesome. I quickly thought of a image directly into the Sun to get a ghost like image to reflect upon the dwindling numbers of lions cubs in Africa. Of course to get that the conditions had to be just right and straight into the sun with a bit of flash maybe, but definitely overexposed. Not being behind my camera to look through the view finder whether I could see if the sun was directly into the camera I had to guess how low and at what angle I should hold the camera. I got one image close but not really what I envisaged. This all had to happen within a very   short period as she was really moving with a   purpose and I had to still also make the gate in time. I probably had 4 minutes left to make it and made the camp 1 minute late but lucky for me the gate guard was also 1 minute late for duty. He literally walked towards the gate as we drove through.

The next day in the afternoon also after running a bit late but this time with almost 39 km's to go on the tar road that I didn’t expect much to happen on a hyena appeared on the side of the road with the same   size cub as the lioness the day before. The den was literally beneath the road in a storm water pipe. There were no real photo opportunity but never the less we had to make use of the serendipitous moment as much we could. To see a lioness with such a small cub running along the road is exceptional to say the least and to see a hyena with the cub also in the tar road is very special. I made the camp just in time again.